In this Case Study, AFS provides an overview of an asphaltene deposition modeling software that was created to assess the asphaltene risk in new or existing subsea assets.

Several commercial models exist to predict wax deposition and hydrate formation, but asphaltene deposition simulators are much rarer. Asphaltenes are hydrocarbon molecules with complex characteristics which have historically been difficult to model.

As the concentration of particles increases, they begin to interact with one another and form larger aggregates. This is modelled as a system of kinetic equations that dictates the formation and depletion of different sized aggregates.

With the distribution of asphaltene aggregates, some will migrate to the wall faster than others. Industry heuristics suggest the smallest particle is the “stickiest,” but all particles are tracked similar to composition tracking. Larger particles have a smaller diffusion coefficient and naturally deposit slower. The model calculates the deposition rate of each particle size.

Any particle that does not collide, deposit, or dissolve back into solution is advected along the pipeline. The physics are represented by a system of non-linear partial differential equations.

Specifics of an asphaltene’s physical properties, kinetics, and deposition tendency are not known to a large degree of precision. To prevent the uncertainty from dominating the calculation, a secondary solution is implemented. This method calculates a change in concentration with a change in pressure. From the newly generated asphaltene concentration, the diffusion rate is calculated and then used to predict the rate of asphaltene deposition. 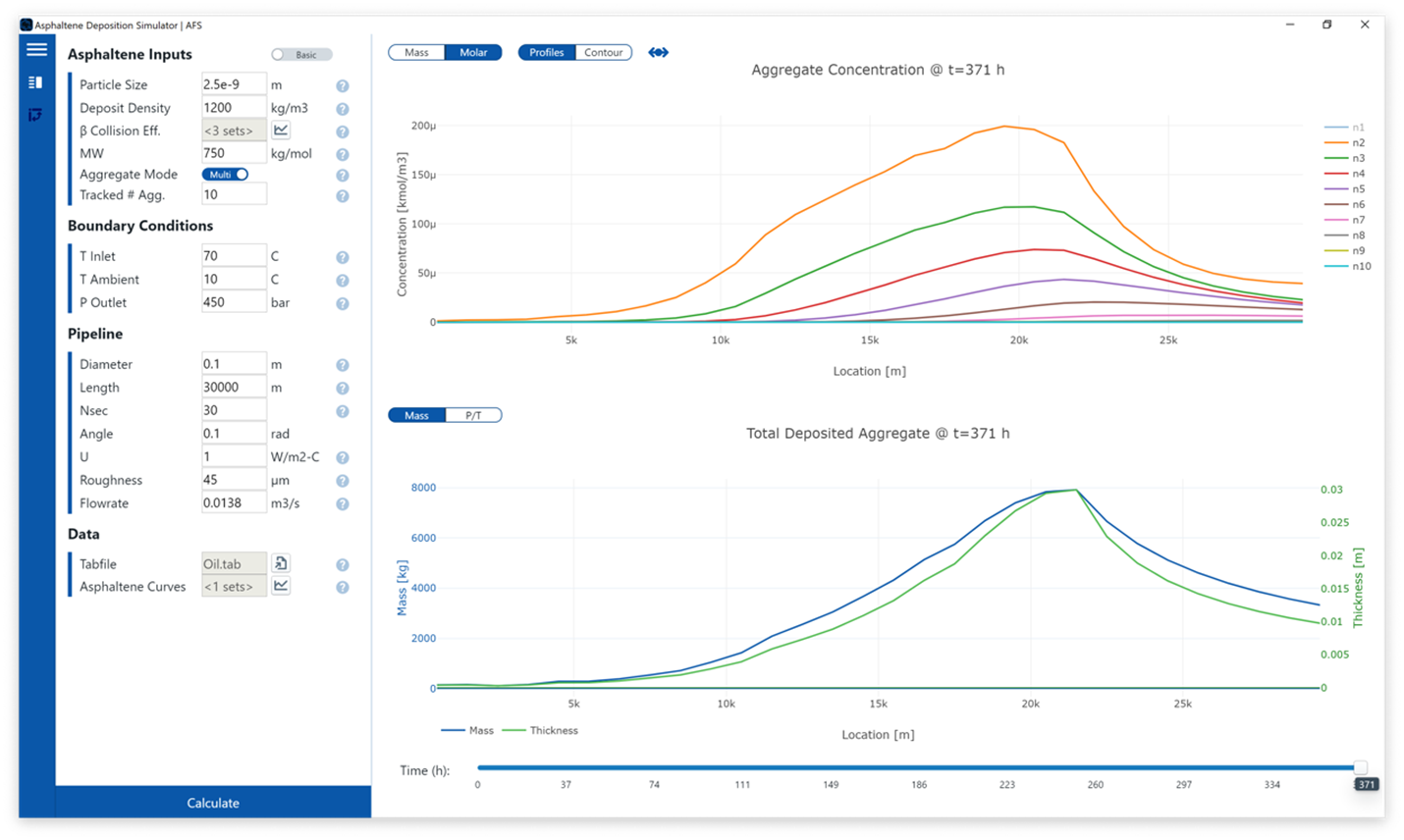 In summary, the AFS asphaltene deposition simulator was created and has been utilized. With fluid characterizations and operating details about the field, AFS was able to reduce the amount of laboratory testing needed for an asset in the Gulf of Mexico.

Additionally, when used with field data, the asphaltene deposition simulator provides a way of identifying risk areas in real-time. If historical deposition data exist, the model can be fine-tuned to better characterize the asphaltenes and deposition rates observed in the field. The tuned model can then be used to produce a better mitigation strategy or develop new operating guidelines to reduce restrictions.

For more information about the AFS technology services, please visit our dedicated service page or contact us to discuss your specific project challenges in more detail.